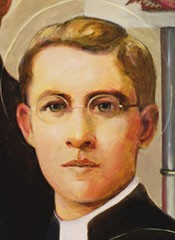 The deadline for the Mexican Martyr for Jan has been extended to the end of this week.  The Vocation Team encourages you to complete the nomination form for your chaplain.  He supports your council, assembly or chapter in many ways.  Why not take the time to say thanks by nominating him for this award?  The nomination award form can be found by clicking HERE or going to the state website.  You will find it under state forms.

If you have any questions please contact John D Bertrand:  johnbertrand44@gmail.com

This month we honor Fr. Jose Maris Robles Hurtado one of the six Knights of Columbus Priest Martyrs who gave up his life for his people and faith.

Father Jose Maria Robles Hurtado was a member of Council 1979. Ordained in 1913, he founded the Sisters of the Sacred Heart of Jesus in Guadalajara when he was only 25. On June 25, 1927, he was arrested while preparing to celebrate Mass. Early the next morning, he was hanged from an oak tree, but not before he had forgiven his murderers and offered a prayer for his parish. He went so far as to place the rope around his own neck, so that none of his captors would hold the title of murderer.