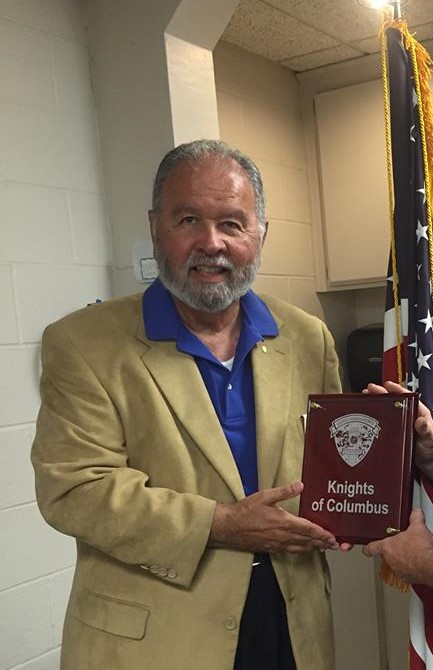 RE: ANNOUNCEMENT OF 2016 KNIGHTS OF COLUMBUS VAVS MALE VOLUNTEER OF THE YEAR

On behalf of our Supreme Knight, Carl A. Anderson, the Officers, and the Board of Directors of the Knights of Columbus, we congratulate Mr. Carlos I. Cuellar, KofC VAVS Deputy Representative, VA San Diego Healthcare System (SDVAHCS), San Diego, CA as the 2016 Knights of Columbus Male Volunteer of the Year.

As the KofC VAVS Deputy Representative and Volunteer at the SDVAHCS, Sir Knight Carlos I. Cuellar, through dedication and strong leadership, has had a very strong impact on the service to veterans at this VAMC with his steadily increasing involvement, serving in many roles over these past two years, amassing 119 hours of service, and recruiting three new Deputy Representatives while serving as the  former KofC Representative for the VAVS committee. Mr. Cuellar diligently works long hours to make sure donated funds and in-kind donations are accounted for and properly used.

In addition to his KofC VAVS Deputy Representative and volunteer duties, Mr. Cuellar, supported by his ever present wife Patti, has initiated many collaborative community programs:

In addition to the above accomplishments, Sir Knight Cuellar, with wife Patti, is very involved with many different events:

Carlos I. Cuellar is a highly motivated, determined, dedicated, and compassionate VAVS Volunteer and Deputy Representative, treating each veteran with dignity and respect.

Over these past two years, he has made a huge impact working tirelessly for Veterans. It is with great pride that Mr. Carlos I. Cuellar is the Knights of Columbus NAC Volunteer of the Year Nominee for 2016.